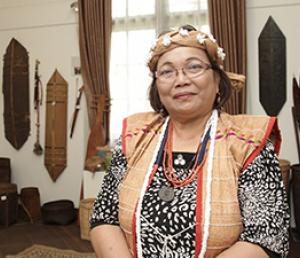 Theodora is a 58-year-old Dayak Aoheng woman from a rural area in East Kalimantan who is playing a very important role in the Total Indonesia Foundation by helping to preserve the Dayak ethnic identity.

Hangin has been involved with the Total Indonesia Foundation since it was created. She is responsible for teaching people in a rural area in East Kalimantan how to produce a variety of traditional Dayak handicrafts. She also ensures and maintains the products' quality standards so that they can be marketed to local, regional and international customers.

How It All Started

Born in Mahakam Ulu in 1956, Hangin is helping to preserve her Dayak ethnic heritage by continuing to produce its handicrafts, which were becoming very rare in the community in recent years. When she was 35, she started to learn all the weaving processes used by all of the Dayak sub-tribes. She was taught informally by her family members. During this time, she learned that weaving rattan is an important part of the Dayak Identity. “The people in our tribes are always competing to make the best rattan weave because that is how they show the Dayak tribe’s spirit.”

Focus and Effort, an Unbeatable Combination

She started her movement with simple projects, such as making woven household items from rattan and pandanus leaves. When this plan didn’t work out, because the tribes preferred plastic to the rattan handicrafts, Hangin didn’t give up. She formed a small company named CV Matan that specializes in Dayak Aoheng handicrafts. These handicrafts have been widely recognized and have won several national awards. Over the years, the company has slowly grown to 20 employees. “It takes a bit of focus and effort to make something happen.”

A Journey with the Total Indonesia Foundation

Hangin encountered Total E&P Indonésie for the first time in 2008 during the Dayak Festival, which was organized by the company for its 40th anniversary celebration. Hangin played an important role in the festival, leading the Dayak Handicraft Tutorial Workshop for the Total Indonesia Foundation. Today, she is one of the masters of Dayak ethnic handicrafts, with an international certification from UNESCO.

“I am thankful and honored to be a part of a foundation that has the same vision as I do. Total Indonesia Foundation has given me the opportunity to preserve my own heritage.”

Graduated from the Faculty of Foreign Languages and Area Studies at Moscow State University with a major in International relations.

Continued her studies in France at Ecole des Hautes Etudes Internationales, specializing in marketing and finance.

Over six years of experience in DIY Retail sales, marketing and operations.